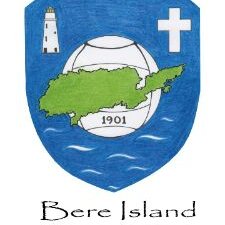 The club is known to have played its first game around the start of the 20th century. The population of the island was much stronger at this time and the facilities were as good as any club in the county at the time. Bere Island's home pitch the 'Rec' was a man made pitch constructed by the British Army. During the 1930s and 1940s, Bere Island had their most successful period. They reached a county final in 1944. The team disbanded and started again a number of times in the following decades. The current era the team reformed in 1995, winning the Beara Junior B title in 1996 and 2008. They have represented Beara a number of times in the Cork County Championship in recent years.

Bere Island has a long and proud Gaelic Football History.  There are records of Gaelic Football being played in Bere Island as early as 1901, some time before the establishment of the Beara Board and its affiliation with the Cork County Board in 1927.  The club’s most successful period was undoubtedly the 1930s and 1940s.  This team won many Beara Junior Championships as well as one Cork Junior County Championship.  Many of this Bere Island team also formed the backbone of the Beara Senior Football team of that time. Indeed Donal O’Sullivan captained the Beara team to four Cork Senior Football Championship titles.

When the history of the GAA in County Cork came to be written in its centenary year of 1984, it was decided to name as a team the best 15 players who ever played football for Cork.  Bere Island was the only club named twice in the selection, with Weesh Murphy at full back and Donal O’Sullivan at wing forward.

In the early eighties the club again prospered winning two Beara Junior Championships in 1981 and 1985. However, like many rural and island clubs around the country, the emigration of the late 1980’s depleted the panel of players to the point where a team could no longer be fielded and the club duly folded.

After being compulsory purchased by the army our club grounds were developed as a sports field. This was part of a wider complex of sporting facilities known as The Recreational Grounds. Today our grounds are still known by the abbreviated term “The Rec”. In 2008 we carried out a substantial redevelopment of our facilities including the redevelopment of the pitch and the construction of a new clubhouse.