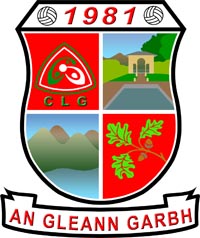 Glengarriff GAA Irish: Cumann Lúthchleas Gael An Gleann Garbh is a club in the Beara peninsula of County Cork it is in the Beara division of Cork GAA. They play in Green and Red colours and their home pitch is Páirc Garbh. The club fields a U-21, Minor and Junior team and underage teams from U-8 to U-16

The history of the G.A.A. in Glengarriff is a story of groups of men who played when numbers were available in a Glengarriff team and in the lean years played with clubs in the surrounding areas. Throughout the years many fine footballers wore the colours of Bantry Blues, Adrigole or St. Colum’s. Very little information or photographs of the older teams was written down so the best available is remembrances of some of the players or their descendants. The local teams played in the Southwest Division from 1920 to the mid thirties, in Beara from 1947 to 1953, in the southwest division in 1960 and the present team in the Beara division. There is a great possibility that all the information in the locality on G.A.A. matters is not included but hopefully what is included is correct.

Of the six clubs presently affiliated to the Beara G.A.A. Glengarriff was the first to take part in an officially organized G.A.A. competition. Even though football and hurling was played in the Beara peninsula as early as 1900 and possibly before it there were no official competitions until the formation of the Beara Divisional Board in 1927. The early games played were mainly hard fought challenges between parish teams or in some cases where numbers permitted teams representing a townland. These games were played on a twenty one a side basis. The choice of foot-wear was hobnailed boots or bare feet so it would be safe to say there was many a sore ankle or skinned shinbone. 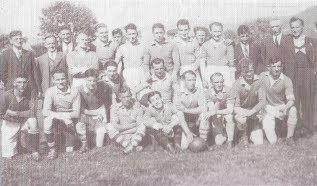 There is no record or remembrances of Glengarriff’s involvement with any of the western teams and it is generally believed that their challenge games were against teams from Coomhola, Kealkil, Bantry and Whiddy Island. In 1920 the Southwest G.A.A. Board was formed and this covered an area from Bandon west. They set about organizing championships in both hurling and football with teams affiliating and then taking part. Glengarriff entered teams in both the hurling and football championships and drew Kealkil as their opposition in both competitions. No result of the games is known but neither competitions were finished until 1921 because of civil strife. The teams continued to play in the southwest eventually concentrating on football. For a three year period Glengarriff remained unbeaten in all games and competitions in the southwest division, winning two novice championships during that period.

In 1931 they reached yet another championship final and this time Rosscarbery were the opposition. Difficulties arose however on the day of the final as both teams wore identical jerseys’ and neither agreeing to change. The game eventually went ahead with Glengarriff leading for the entire match until virtually the last kick of the game. While taking a kick out the Glengarriff goalie miss took a Roscarbery player for one of his own and kicked the ball straight to him. From the resulting attack they scored a goal and victory went to Roscarbery by one point. It is generally believed that the last team appeared in 1933 in possibly a league final played in Dunmanway. This game it seems was never finished and shortly afterwards the Glengarriff team broke up.

In the mid 1920’s the present day community field, Pairc Garbh, was purchased by the G.A.A. Club for use as a football pitch. In need of renovation a delegation approached the then Taoiseach who was visiting the area to seek a grant. He told them that to ensure they got a grant it would be better for the pitch to be the property of the community. In an effort to secure the grant the pitch was transferred over and a grant of £l00 was duly secured from the Minister for Finance.

Adrigole at this time were also fielding a team in the Beara Divisional Competitions so the players from both areas played with Glengarriff or Adrigole depending on which area could field a team in the different years. As already mentioned the last Glengarriff team of this era was possibly 1933. Some of the players of that era were Eamonn Ger O'Sullivan, John Crowley and Timmy Crowley, Jim Harrington (Bawn) and Patrick O’Sullivan (Pate Noin) Bocarnagh.

Even though the pitch in Glengarriff was used for many Senior County Championship games it was not until 1947 that a Glengarriff team next appeared. That year they entered the Crowley Cup, Beara Junior Football Championship. They played in this competition along with the Murphy Cup Beara Junior Football League for several years with the last being 1952. In that year they reached both the League Final and the Championship Final but lost both.
Some of the players from that era were:
Patrick O’Sullivan, Bocarnagh Donal Houlihan, John Hartnett, Willie Hartnett, Jer O’Sullivan, Bocarnagh, Mick O’Sullivan, (Mike Den) Donie O’Sullivan (Mike Den) Dan O’Sullivan, Lough Avoul, Jer Harrington (Nance), Coomhola, Paddy Harrington (Nance), Coomhola, Mike Harrington (Nance), Coomhola, John O’Sullivan (Peter), Derrnafulla, John Falvey, Brendan Falvey, Cooraniel, Christy Moriarty, Brian O’Rourke, Michael O’Sullivan (Dick), Inchintaggart.
These were joined in the later years by:
Donal Buckley, Mossie Downing, Arthur O’Brien, Danny O’Regan, Ardnatrush, Mickie Harrington (Bawn), The Village, Garda John Molloy, Brendan Connolly, P.J. Connolly, Tony Connolly, Paudie Downing.
By 1953 virtually all of these players had emigrated or moved to other parts of the country and with not enough players left the team again broke up.

In the late fifties a number of youngsters were playing underage football with Bantry and it was felt that there was the basis of a team. To start the ball rolling a minor team was entered in the Southwest Minor Football Championship with Newcestown being the opposition. The game was played in Lahadane, Bantry as a curtain raiser to the Beara V St. Michaels County Senior Football Championship on April 17th 1960. Newcestown won the game by five points and went on to win the West Cork Championship that year.
The panel of players for that game were:

Again, however many of these players emigrated so a team could not be fielded the following year. Bernard Harrington, Dan Joe Murphy and Eddie (Jer) O’Sullivan moved to play with Adrigole and helped them win their first Beara Divisional Junior Championship in almost thirty years.

Despite the successes and disappointments of previous years, 1999 was to be the pinnacle for the Glengarriff G.A.A. Club. An unbeaten run in all games saw the Junior team take a Southwest League title with victory over Clann Na Gael of Drimoleague in the final played at Kealkil. In the Beara Division was more of the same with a League and Championship double victory, taking all titles in style.
At the back of everybody's minds however was the belief that a County Title was in the grasp of the team. Team trainer Peadar Healy along with the selectors John Brooks and Denis Heffernan put in many long hours to achieve that dream.
In the opening round Ballinacurra, the East Cork (Imokilly) Champions were the opposition with Kilmurry being the venue. Victory came Glengarriff’s way and so it was on to Inchigeela and a semi-final clash with Duhallow Champions Castlemagnier. Early dominance by Glengarriff paved the way for victory. Despite some torrid moments and near misses a resilient opposition were overcome and victory came Glengarriff’s way by one point. A place in the final was achieved and everybody looked forward with strong belief. Carbery Champions Randal Og were the opposition and Rossa Park in Skibbereen the venue. However, just two days before the game disaster struck. Influential midfeilder, Liam Regan, suffered a work injury with hospitalisation meaning he missed the final. On the day, however, all obstacles were overcome and Glengarriff annexed the County Junior Football Championship. 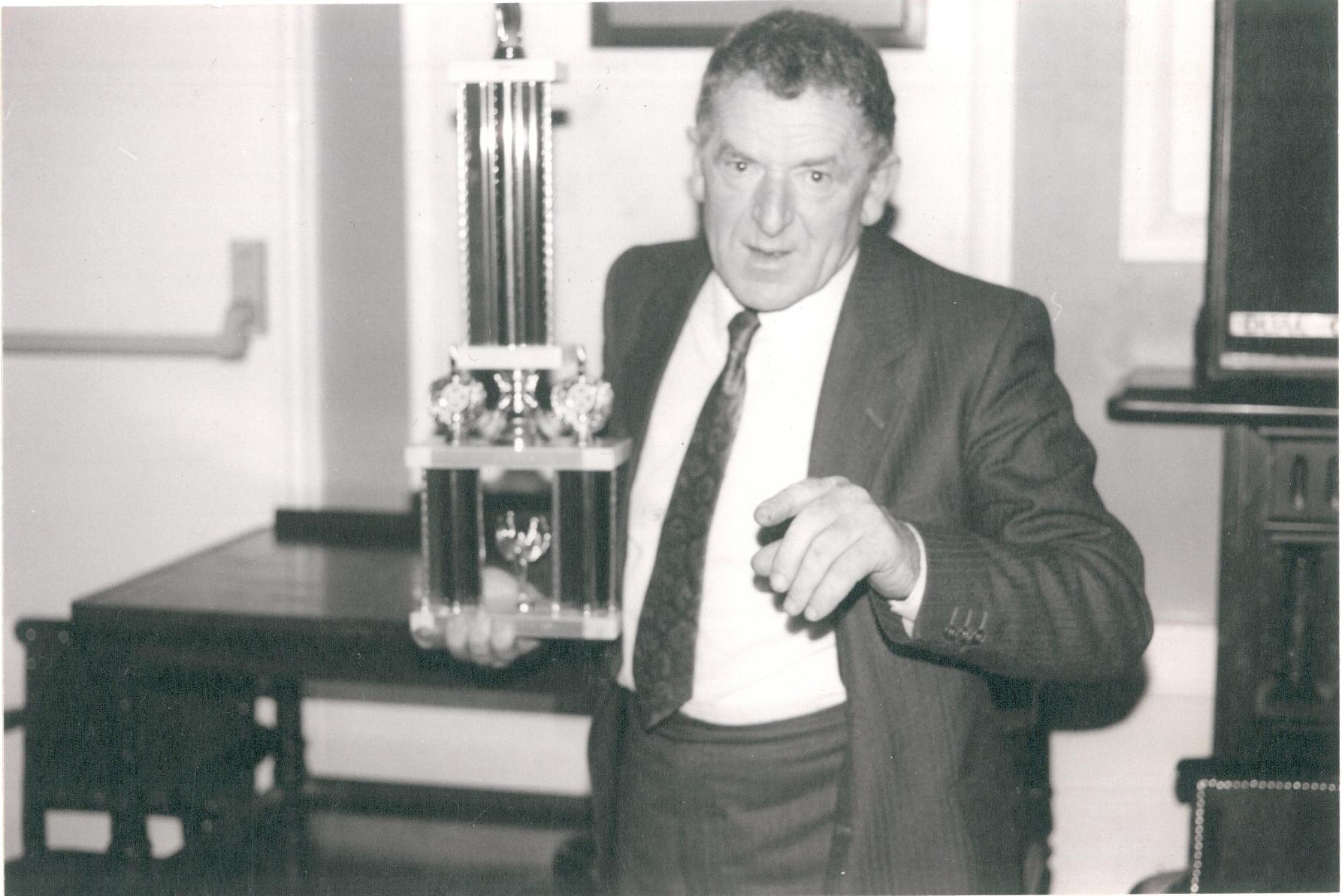 With Denis Heffernan and Some Stars of The Future 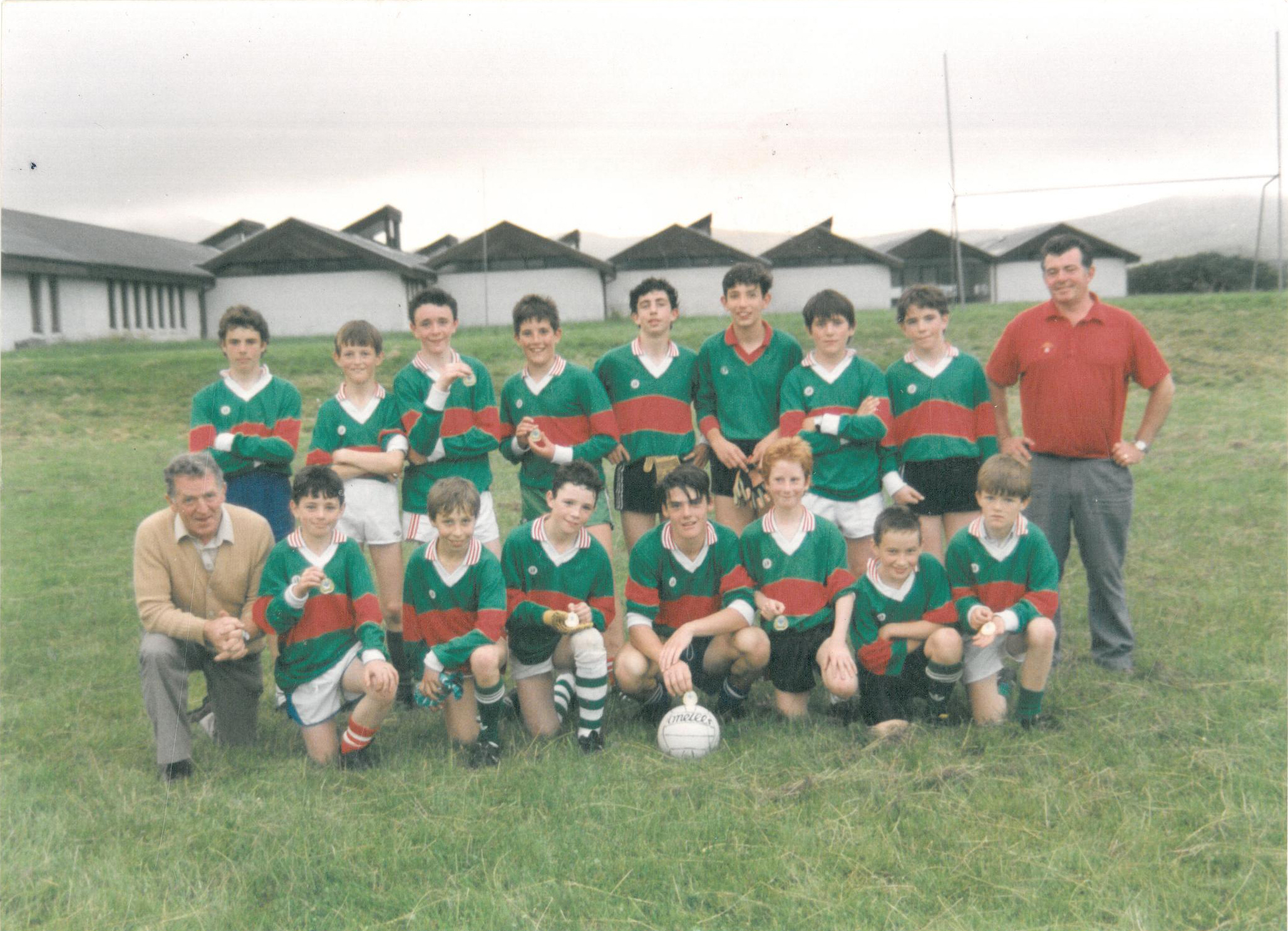 Challenge Match With a Small Squad 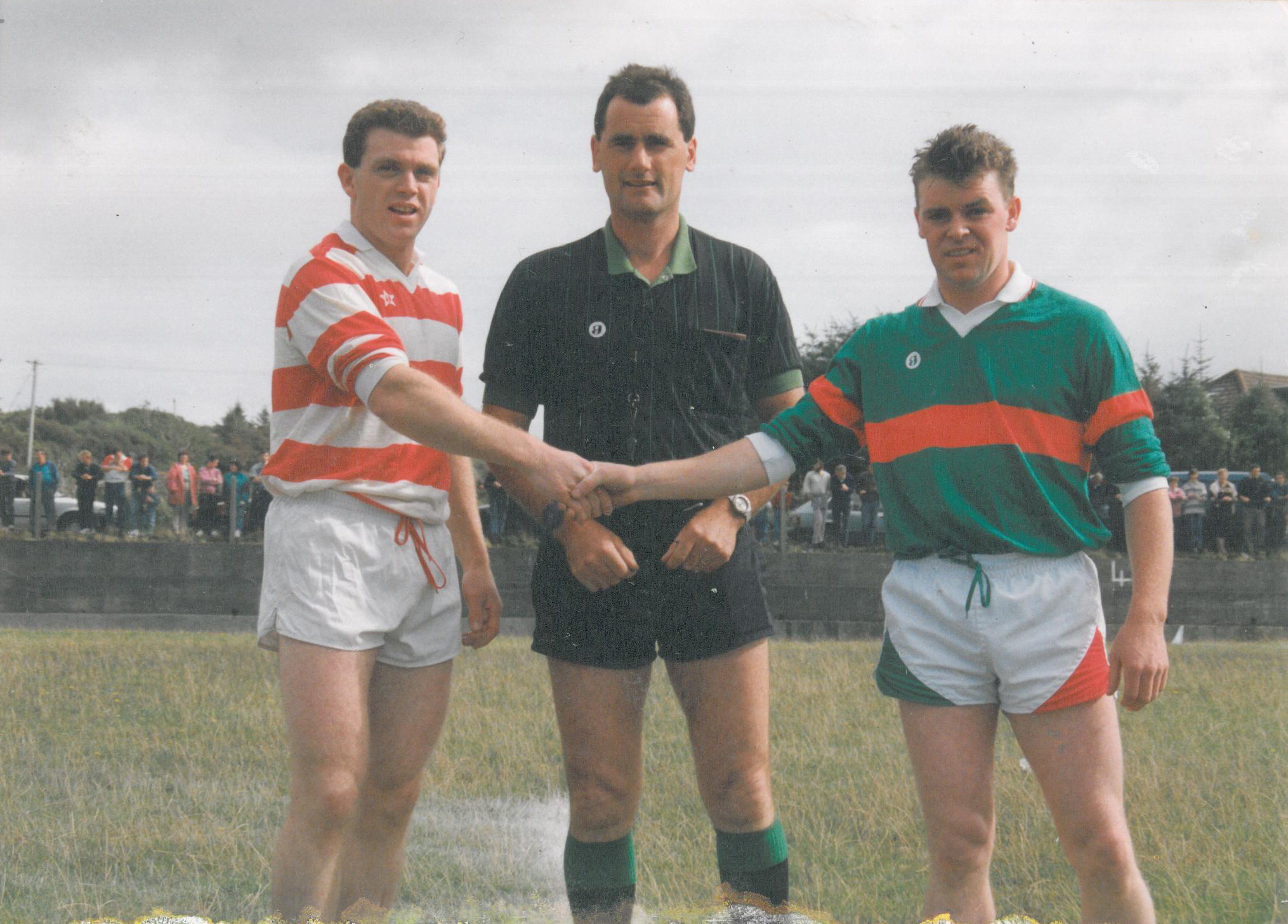 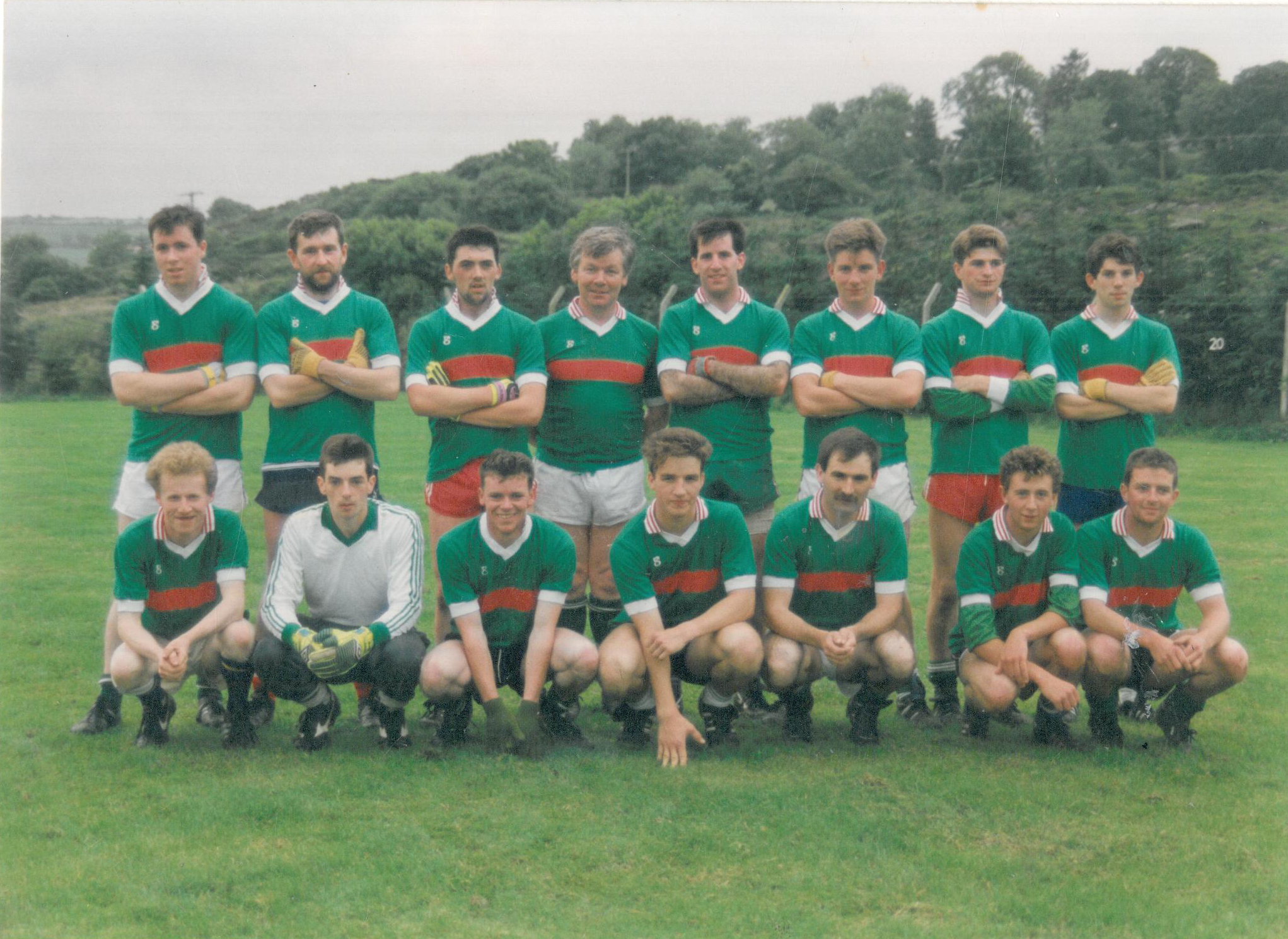